City walking holidays are more popular than you may think and this trail of the eastern “New Town” of Edinburgh begins here at Parliament House Hotel! Our Heritage Edinburgh Walking Trail invites you to explore some of the hidden gems of the World Heritage Site often missed by visitors. It also reveals stunning panoramic views over Edinburgh Castle and Old Town en route.

This particular trail can be done if you are on walking holiday in Scotland or simply visiting Edinburgh for a day trip. Our Heritage Edinburgh walking tour takes around one hour, with a twenty-minute additional option offered.

As you leave the hotel, pause to view the attractive but contrasting architecture which forms our historic building.  Our hotel on Calton Hill in Edinburgh carries some history in itself! 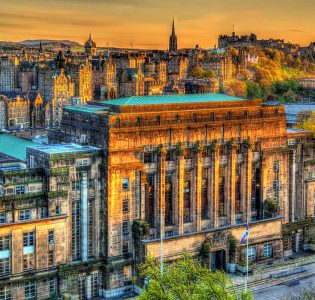 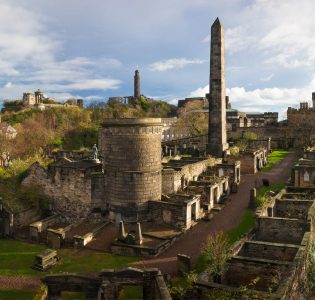 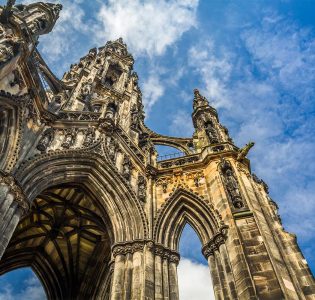 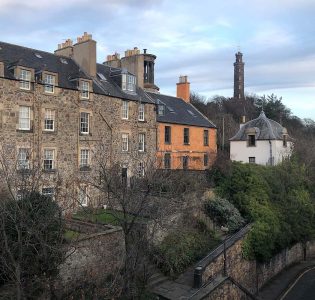 Interestingly, Parliament House Hotel can claim to be part of both Old and New Town. Sitting on a steep road called Calton Hill, which once was a small village, Calton Hill was Edinburgh’s only link to Calton burial ground. Our Calton Hill Hotel in Edinburgh’s heart sits in front of Regent Bridge, which in the early 19th century opened up a route to the magnificent New Townhouses of Regent, Carlton and Royal Terraces.

The hotel itself reflects both Old and New Town. No.15 was built in 1908 reflecting New Town neoclassical styles, inspired by ancient Greek and Roman architecture. Nos.13 – 9 were built two centuries earlier in the tenement style of Old Edinburgh. Both are now listed buildings.

At the hotel entrance turn immediately right up the staircase to visit the rarely visited northern section of the Old Calton Burial Ground. 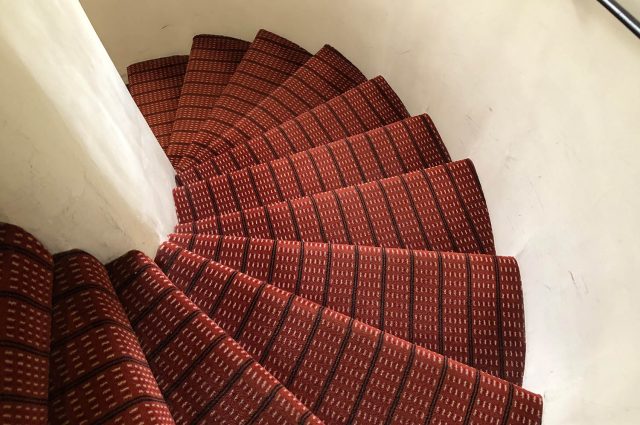 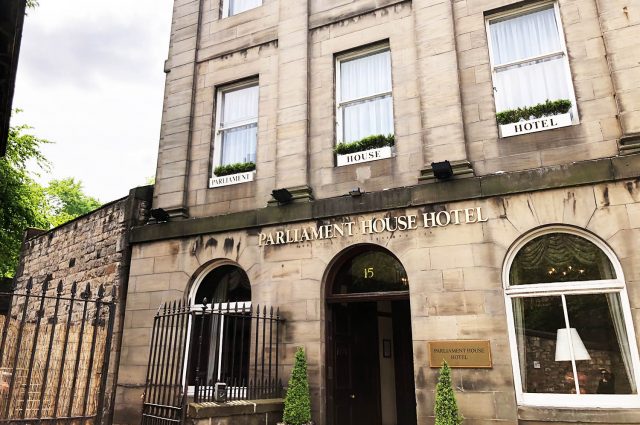 The Regent Bridge, completed in 1819, dissected the Old Calton Burial Ground. This little section of the graveyard is rarely visited and is indeed unknown to most of Edinburgh’s citizens. It is a quiet little haven in the centre of Edinburgh despite its grave outlook! Take time to admire the skill of those who carved the stone memorials within. The inscriptions offer tantalising glimpses of the lives of past Edinburgh worthies, including merchants, brassfounders, and ministers.

Return to the hotel entrance and look left up Caltonhill road. 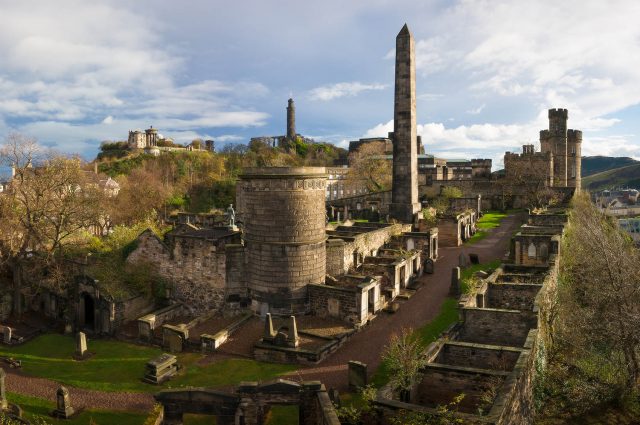 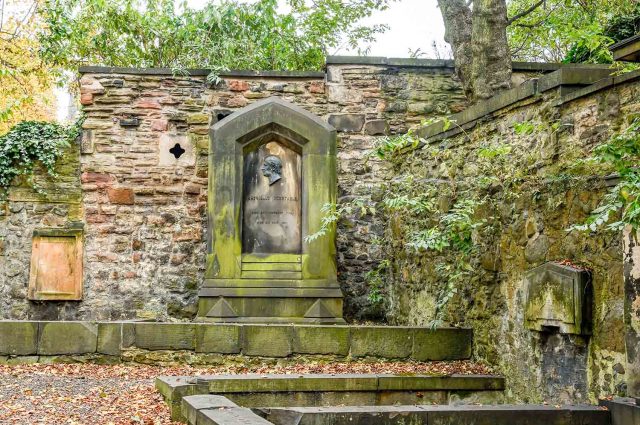 Until the 1800s the street of Caltonhill was known as ‘High Caulton’. Residences in this ancient barony were prestigious. The homes, visible on the North side and reached by a series of steps and raised paths, were built in the 1760s, and were soon occupied by prosperous citizens. Street directories of the 1770s and 80s list several ‘gentlewomen’ of independent means, solicitors and bankers. Bucking the trend was ‘William Woods, comedian’ – no doubt a comedy actor at the nearby theatre.

In contrast, at the bottom of the street, lay ‘Low Caulton’ also known as ‘Beggar’s Row’. This was a notorious area of taverns and houses of ill repute. The proud residents of High Caulton went to great lengths to avoid confusion with their neighbours! In 1763 a letter to the City declares:

‘The street of the Low Caltoun has no connection with the Barony of the High Caulton’.

Walk to the top of the street to the junction with Regent Road and Waterloo Place. 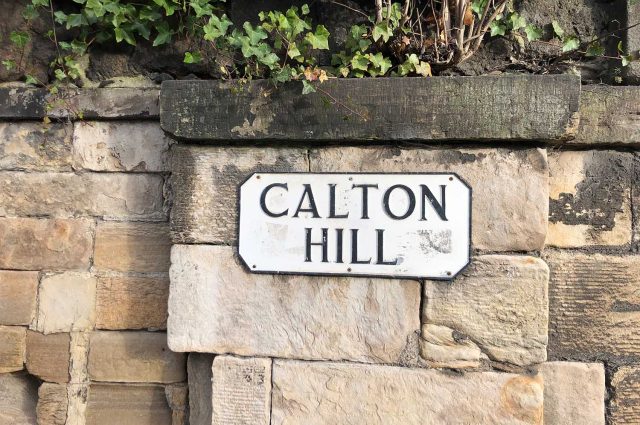 The street was originally named Princes Street after the Prince Regent who later became King George IV. It was not planned as the principal street but, with its open outlook to the gardens and spectacular views of the Castle, it became the most popular street in Edinburgh’s New Town.

From here look out for:

Head east along Regent Road (away from Princes St.). Glance back to view Lincoln in silhouette. 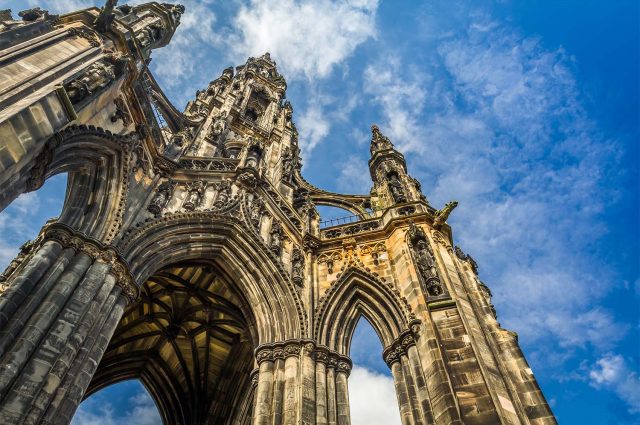 Cross over to the south of Regent Road to view the impressive St Andrew’s House, named after Scotland’s patron saint. It was built in the 1930s to house the ‘Scottish Office’ of the United Kingdom government. Atop the tall bays on the frontage, the six half figures represent Architecture, Statecraft, Health, Agriculture, Fisheries and Education. It now houses the administrative offices of the devolved Scottish Government.

Constructed on the site of the Bridewell of the old gaol, it has a rather gruesome secret. The bodies of ten convicted murderers were buried on the site after their execution and remain there today – underneath the concrete of the west car park of St Andrew’s House.

Next on our Edinburgh walking trail, head east along Regent’s Road until you reach the top of a staircase labelled ‘Jacob’s Ladder’. Enjoy spectacular southern panoramic views of the Old Town area on the next stop in our walking trail of Edinburgh.

Walk on until you reach the beautiful Burn’s Monument. Completed in 1839 by architect Thomas Hamilton, the monument is modelled on the temple of Lysicrates in ancient Athens, it commemorates Scotland’s greatest bard, Robert Burns. In the valley below the monument, his lover Clarinda lays buried in Canongate Kirkyard.

Walk a little further until you reach the entrance to New Calton Burial Ground. (Visit recommended in daylight only!)

If you are time-limited, pass five minutes here, but linger longer and you will be rewarded by viewing some of the most scenic views of the eastern Old Town. As it was opened in 1820 to re-inter the graves disturbed by the cutting of Waterloo Place through the Old Burial Ground, there are some transferred eighteenth-century monuments as well as many nineteenth-century graves.

If visiting briefly look out for:

If you are lingering a little longer look out for:

Carry on walking eastwards via Regent Road Park to the eastern end of Regent Road.

As you walk look out for:

On reaching the end of Regent Road, which is the boundary limit of the World Heritage site, cross over and climb up onto Royal Terrace. In the next part of our walking trail of Edinburgh, we explore a beautiful but little known section of the ‘New Town’. 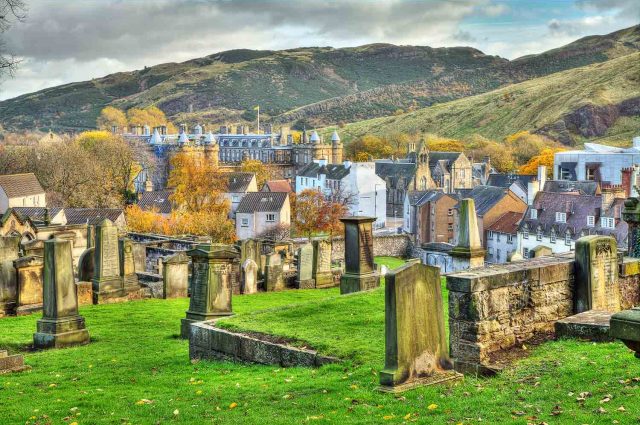 Look west along this magnificent New Town terrace and marvel at its scale. Designed by the famous architect William Playfair in the 1820s, its frontage seeks to give 40 individual townhouses the external appearance of a great classical palace. This was an approach pioneered by the great Robert Adam in Charlotte Square during the earlier stages of the New Town’s development.

Cross over and stroll up Carlton Terrace Lane. As you walk why not take time to explore the hidden gems of Carlton Terrace Mews and Royal Terrace Mews? These pretty but rarely visited lanes and courtyard comprise converted stables and workshops which now provide tranquil dwellings within a stone’s throw of the bustling city. At the top of the lane, turn right on to Regent Terrace and walk west towards the hotel. In this street, Playfair designed a line of beautiful, well-proportioned terraced houses with continuous trellis balconies and Greek Doric porches.

As you walk along lookout for:

At the end of Regent Terrace re-enter Regent Road and make your way back to the hotel.

You are walking past the old Royal High School of Edinburgh built-in 1825-9 to a Greek Doric design by Thomas Hamilton. It is an important monument of the Greek revival which led to Edinburgh’s New Town being described as the ‘Athens of the North’. The school moved to another part of Edinburgh in the 1970s.

In the late 1970s, the building was adapted to provide a new parliament building for Scotland but the referendum of 1978 failed to confirm a Scottish assembly and the building lay dormant.

When Scotland finally regained a parliament in the late 1990s, this building was no longer seen as fit for purpose. As a result, in spite of its new title, it never hosted the Scottish Parliament.

Above this building sits Calton Hill with fantastic views of the city and many monuments which contribute to its reputation as the Athens of the North. If you wish to undertake an exploratory climb (highly recommended in daylight hours) a guide to the monuments of Calton Hill is available from the hotel reception.

This Edinburgh walking trail was researched by Edinburgh World Heritage. EWH is a charity, funded by donations, City of Edinburgh Council and Historic Scotland, which seeks to conserve and promote the city’s World Heritage Site. Visit the website www.ewht.org.uk 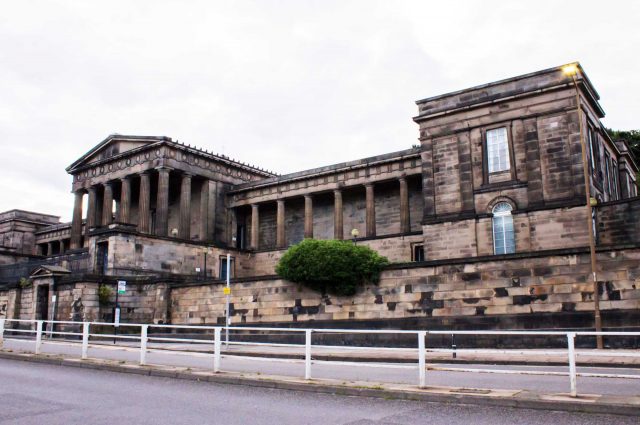 ‘A lovely cosy welcoming hotel. The staff were helpful. The breakfast was very good with a great range of hot & cold food. I would definitely book again.’

The Best Way to Explore Edinburgh: Day One

Find out more about our foodies itinerary here......

Find out what to do on your first visit to Edinburgh......